GUEST BLOG: IS NOW THE TIME TO CAPTURE CARBON?

Is Now The Time To Capture Carbon?

In April this year, the UK Government published their CCUS investor roadmap following the commitments to carbon capture, usage and storage (CCUS) set out in their Ten Point Plan for a Green Industrial Revolution. The roadmap sets out the Government’s approach to delivering four CCUS low carbon industrial clusters, capturing 10 MtCO2 annually by 2030 – equivalent to four million cars worth of emissions.

The challenges in carbon capture technology will provide opportunities for innovation and the development of valuable new intellectual property (IP).

While zero CO2 emissions may be the ultimate goal, it is clear that we must do everything we can to reduce our global emissions if we are to limit the global temperature increase to less than 1.5 degrees Celsius. So perhaps we should embrace every opportunity available to us to reduce the amount of CO2 in the atmosphere.

There are several types of carbon capture technology that may be utilised as we strive to reach net zero. CO2 emitted from traditional power generation and industrial processes can be captured and prevented from entering the atmosphere at source.

There are three primary carbon capture techniques used to remove CO2 from the emissions created by burning fossil fuels. They are:

Each method has its own benefits, and no single solution will be the answer. For example, post combustion capture can be retrofitted to existing plants, whereas pre combustion capture is cheaper, but cannot be applied to older plants.

Carbon capture can also be used to “suck” in CO2 from the open atmosphere in a process known as Direct Air Capture (DAC). The estimated energy needed for DAC is higher than for conventional carbon capture units used for emissions at source. The cost of implementing DAC is also likely to be higher, but it is a good option for tackling the emissions from many diffuse emission sources.

After the CO2 is captured, instead of it being emitted back into the atmosphere, there is potential to use and commercialise the captured carbon, or it can be stored underground.

In general, the number of patent applications related to carbon capture technology has been steadily increasing over the last 10 years. There were nearly three times as many published applications in 2020 compared to 2010 reflecting the growing interest in this field and the increased urgency to achieve net zero.

CPC class Y02C20/40 also shows which applicants are filing these patent applications. The top ten filers over the last 11 years are shown in Figure 2. 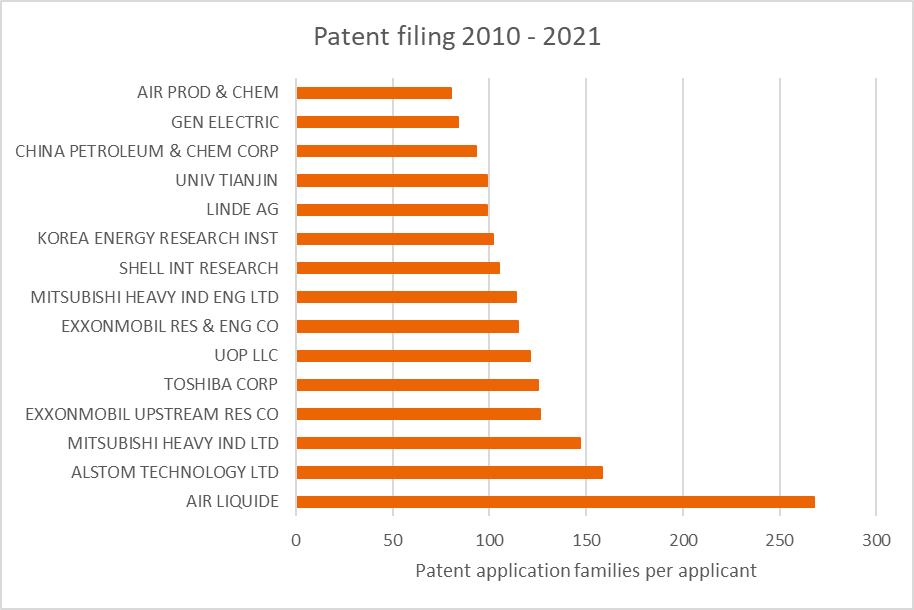 The top filers are large oil and gas players and industrial gases companies, who are adapting their business models and seeking to adopt less-polluting alternatives to reduce their emissions from their heavily emitting industries.

However, there are plenty of new innovators in this sector who are developing new carbon capture solutions and protecting their inventions with patents.

For example, Carbon Clean have developed a modular system and proprietary solvent to capture CO2 from flue gas. The modular system can be easily tailored to the size of the emitting plant, and therefore reduce the costs of implementing carbon capture technology by up to 50%.

Carbon Engineering are a direct air capture focused company and have ten patents or patent applications. Their DAC pilot plant was designed and built as a proof of concept and testing facility. When operating, the pilot plant captures one ton of CO2 per day. Recently, they announced that engineering and design has begun on a large-scale commercial facility.

Like many new technologies, the cost of capturing CO2 has been prohibitive for large scale commercialisation. But with government commitments, private sector innovation and a global focus on tackling climate change, we could see an acceleration in carbon capture technology.

The challenges in carbon capture technology will provide opportunities for innovation and the development of valuable new intellectual property (IP). We at Reddie & Grose are very much looking forward to working with clients in protecting their IP to help them achieve their environmental goals.