The UK Government has announced a number of measures aiming to boost Britain’s energy independence and security. To reduce the UK’s reliance on imported fossil fuels, a growing proportion of electricity will come from renewables. In the British Energy Security Strategy (BESS), the UK Government published its energy ambitions, stating that by 2030 95% of British electricity could be low carbon and by 2035 the electricity system will be de-carbonised.

Renewable energy output is both variable and intermittent. So, with renewable energy set to take a more predominant share in the total power mix moving forward, how can the UK ensure grid safety and reliability in power supply?

Energy supply technologies, including solar and wind power have the potential to generate huge amounts of the UK’s electricity. However, they are intermittent by nature leading to significant swings in power output. The UK’s ambitions to reduce fossil fuel reliance and to increase renewable electricity generation through wind and solar energy will therefore present significant new challenges when it comes to balancing the grid.

It is not just lack of power during periods of low wind or light that energy generators need to worry about. Analysis by LCP indicates that by 2030 there will be an oversupply of power for 53% of the hours in the year, compared to the expected 6% for 2022. Unless effectively managed and mitigated, oversupply will put a huge strain on the grid and lead to energy wastage. While there are already many mechanisms in place to balance the grid and smooth the electricity supply, it is clear that the increasing reliance on renewables will require a new approach to system flexibility.

It predicted that over 50 GW of new demand-side flexibility from energy storage, electrolysers and interconnectors will be needed to support the drive for more renewable energy.

Tracking patent filing trends is a useful way of understanding technological development. As shown in Figure 1, there was a steady increase in the number of European patent application filings for “energy storage”, published between 2010 and 2020. However, the number of published patent applications is yet to show the exponential growth that may be required to support increases in renewable energy generation. 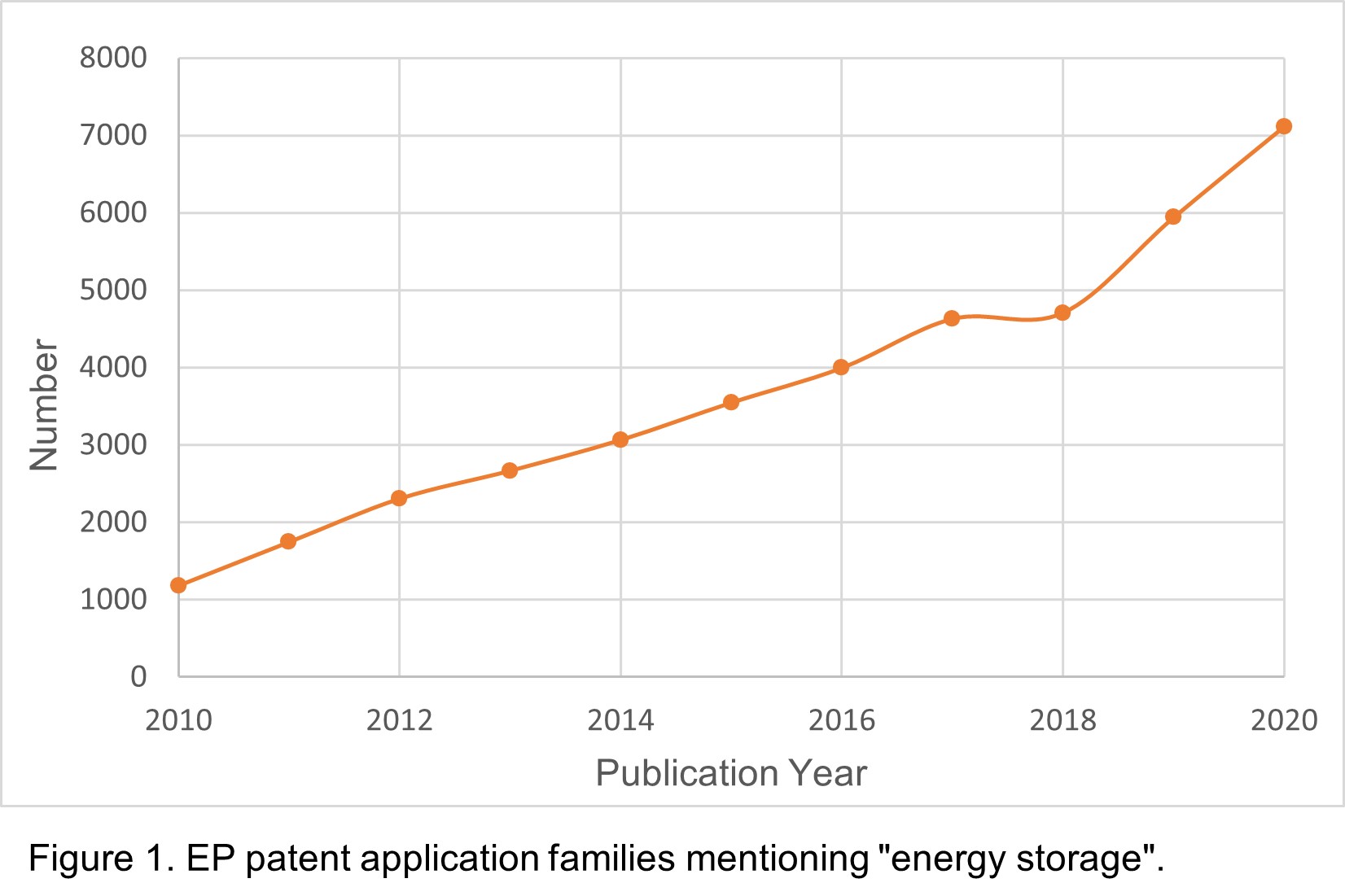 The BESS highlights the need for flexibility with sufficient largescale, long-duration electricity storage to balance the overall energy system. Long duration energy storage (LDES) is particularly suited to handling renewable over/under supply because it allows energy to be stored for a period of several hours or more.

By 2040, LDES will need to have scaled up to around 400 times present levels and it is estimated that 10% of all electricity generated would be stored in LDES at some point.

Other examples of LDES that are being explored are molten salts coupled with concentrated solar power (CSP) plants; power-to-hydrogen-to-power; and batteries such as aqueous flow batteries and metal anode batteries.

Selecting just one of these promising LDES technologies, Figure 2 shows that the number published European patent applications mentioning “compressed air energy storage” has grown by over 400% between 2010 and 2020. 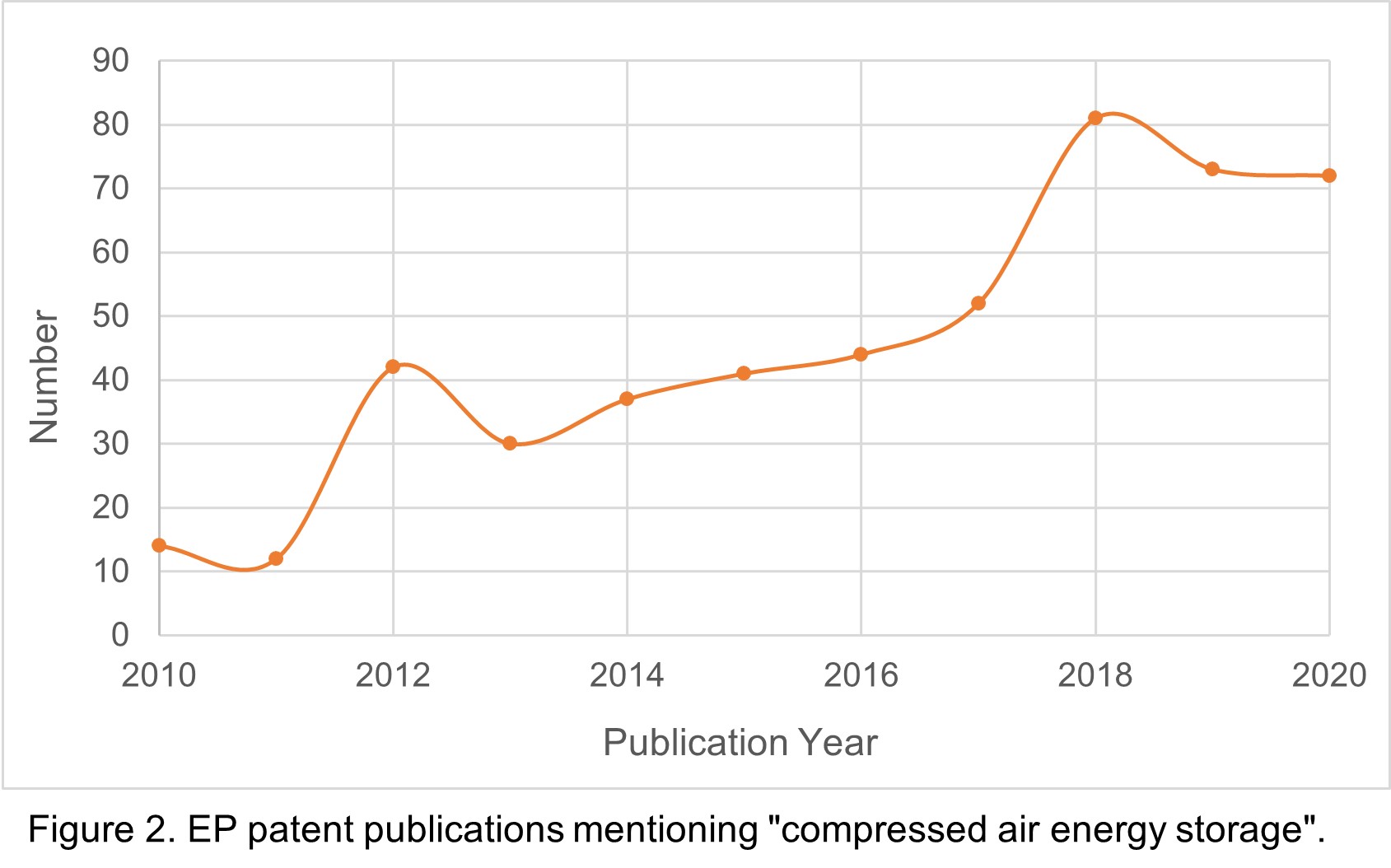 While the total number of publications mentioning “compressed air energy storage” is relatively low in comparison to energy storage as a whole, the data show a clear increase in interest around CAES. This growing interest in CAES may or may not be indicative of the growth in research and investment in LDES as whole, but it certainly shows that energy storage systems are being developed to support the increasing de-carbonisation of our electricity supply.

This blog features in Reddie & Grose’s second Sustainable Future newsletter: Exploring innovations for the Energy Transition and a Circular Economy.

Please click on the following link to read the summer edition: